A unified and coordinated SBCC approach

A unified and coordinated SBCC approach of DGHS and DGFP together with NGO will bring a better impact in the HPN fields said Md. Habibur Rahman Khan Additional Secretary (PH&WH), MoHFW.
Behavior Change Communication Working Group (BCCWG) in its 26th meeting further emphasized on the need of coordinated effort for HPN SBCC activities in order to maximize utilization of resources, avoid work duplication and bringing a synergistic impact for the program. This meeting was held on December 27, 2019 in the IEM conference room of the DGFP Chaired by Mr. Md. Habibur Rahman Khan Additional Secretary (PH&WH), MoHFW while Mr. Kazi A.K.M Mohiul Islam, Additional Secretary (FP, FW & law), MoHFW attended the meeting as Co-chair. Other officials include; Mr. Md. Ruhul Amin Talukder, Joint Secretary (PH-2), Ms. Asrafunnesa, Joint Secretary and Director (IEM), Dr. Samir Kanti Sarkar, Director (IPHN) and Dr. Md Sarwar Bari, Line Director (FP-FSD).
There was a good level of discussion took place while reviewing the minutes of the last meeting that led in coming up with decision on the following issues;
-A uniform School Health Curriculum has to be followed by entire units of the DGHS and DGFP those are having School Health Programs. The HPN School Health Curriculum as have been developed by the IEM could have been followed by other units with necessary adaptations.
-As there was updates over the annual HPN SBCC report, the meeting decided to develop a printed version of the report and expected to get the first draft by January 15, 2019.
-Following the GO over the formation of the HPN Coordination Committees at the District and Upazila level it became responsibility of the HPN units and the NGOs to get these committees activated and functional through their field forces. 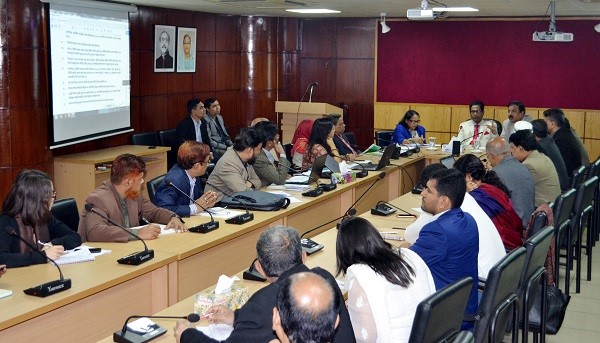 The meeting was participated by HPN unit representatives from the IPHN, BHE of DGHS and CCSDP, FSD, MCH and MIS of DGFP. NGO representatives include; Ipass, SMC, Inca, WASH, mpower social enterprise, Sisimpur project, FPAB, Challenge TB, JICA and Ujjiban. In order to share SBCC activities for last three months, organizations brought it up through presentations. These activity sharing presentations were made by the IPHN, JICA, BHE, mpower, Challenge TB, Ujjiban and IEM.
The presentations highlighted few innovative approaches that brought up attention and interactions in the meeting. The Unit Directors had some specific comments over these presentations as below;
Director-IEM: While coming up with SBCC activities in the BCCWG meeting the Units and NGOs requires to consider comprehensive SBCC strategy and line it up with four key activity domains.
Director-FSD: In addition to mass media and social media channel we also need to consider IPC as one of the most effective channels for communication.
In their remarks the Co-chair emphasized on the synchronization of efforts in implementation of SBCC activities to attain better impact. The Chairperson of the meeting underscored the need of a unified and coordinated SBCC approach of DGHS and DGFP together with NGO which will bring a better impact in the HPN fields.